An Open Letter to the President of City College

Today, on May 6th at 12pm, you were supposed to be present for a meeting, that you had called, with the organizers of the Gender Resource Campaign, the Undergraduate Student Government, and key members of the administration. This meeting was a culmination of our struggle to establish a Gender Resource Center for the survivors of gender-based violence on the campus of City College during which we were to discuss next steps in the creation of a physical space and the services that will be provided. This meeting’s date and time was moved multiple times, and despite the uncertainty and disadvantages that this has caused us, we are present here today. However, YOU have chosen at the last possible moment to NOT attend the meeting that YOU called.

Your decision to not go through with the meeting today indicates that survivors of gender-based violence do not matter to you. And that you and your administration will continue to eschew responsibility for the infestation of rape culture on our campus and the reproduction of unsafe spaces for survivors. The reproduction of unsafe spaces is explicit in the materials produced by administration, such as the “Prevention of Sexual Assault” pamphlet, which is an explicit example of victim blaming. This reproduction is also evident in the systems that administration has put in place to deal with gender-based violence issues, like reporting. Additionally, the decision of the university to have untrained students create a campaign regarding Title IX is a visceral example of the fact that administration does not comprehend the contours of the issues surrounding gender-based violence. Rather than creating a safer space for survivors, these flyers endorse narratives of the “good” survivor, which prevents survivors from coming forward and reaffirms unsafe spaces on our campus. It makes the campus inaccessible for many survivors, who are students.

This failing of our administration is of no small accord. One in four women will experience sexual violence throughout their college career. Of these women 50% to 95% will develop PTSD. Almost 50% of all survivors of gender-based violence develop symptoms of depression. Students personally shared their stories with you at roundtables regarding their own feelings of safety on campus, leading to the implementation of gender neutral bathrooms and a “reaffirmation” of our non discrimination policy.

While these are steps in the right direction, administration has not confronted many issues, including the issue of transphobia as a cultural norm on our campus. Many students report to clueless deans and administrators who will not use correct names, pronouns, or even understand why it is violent to deny someone’s personhood and boundaries based on gender expression and identity. Transitioning at our college is a bureaucratic nightmare, yet, as students drop out due to psychological trauma, we must wait.

Today was an opportunity for the administration of City College to join survivors in taking a stance against gender-based violence. Today, we could have made our university become a national example of what a survivor and student centric university could look like. Today, we could have established a model that was inclusive and progressive. Instead, today our campus remains as an example of the toxic, violent state of our society. 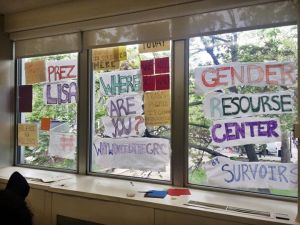 *Update: after notifying Undergraduate Student Government that she would be in “emergency meetings” all day downtown, President Lisa was spotted on campus at a meeting with faculty around 3pm. Surrounded by more security guards than usual, it was discovered that she was on campus the entire day. Members of the student body tried to gain insight on to why the President would purposefully cancel her own meeting, but were instead followed by Public Safety officers around the campus.